How a reablement system also helped spot a severe UTI

How a reablement system also helped spot a severe UTI

The Daily Living System is now being used by occupational therapists across the country, providing unbiased evidence of an individual’s progress during reablement. 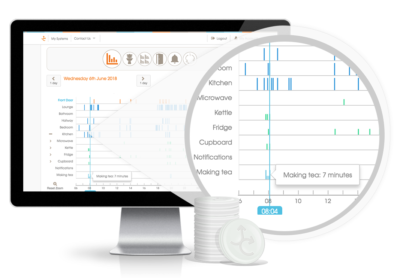 Comprising small movement, door and activity sensors that send information to secure online charts, the system gives practitioners objective visibility of an individual’s movements around their home. It will show, for example, when an individual completes a task set as part of their reablement; such as making a hot drink or having a shower.

It is this combined visibility of task completion and movement around the home that has led many OTs to say that the system helps them discover important information that may have been difficult to identify without it, especially when an individual doesn’t mention or denies the difficulties they are having.

One recent example of this was in Scotland, when a reablement team installed the Daily Living System into the home of an individual to understand their washing and dressing abilities.

Having entered into the reablement service with a UTI five days previously, Just Checking helped highlight that the individual was going to the toilet very frequently.

Although they told OTs they weren’t visiting the toilet more than usual, the evidence from the system and the fact that the individual appeared slightly confused led the OT to carry out a 4AT delirium screen, which received a score of 8/12.  Further discussion revealed the individual had stopped taking their antibiotics due to large hives appearing on their arm.

The OT was able to link with the individual’s senior charge nurse and GP. A urine sample showed a severe UTI, and the individual was put on suitable antibiotics. A week later the 4AT test was repeated, and they scored 0/12, showing no delirium.

“Just Checking highlighted frequent visits to the bathroom, which helped us spot a UTI earlier than we might have otherwise, especially as the individual wasn’t providing information to help us do so. It’s a valuable tool that provides objective evidence that supports practitioners.” Principal Manager, Reablement Team

The Daily Living System helps practitioners to spot unusual patterns of activity, which can be a good way to start conversations. It can highlight when an individual is up in the night, when they visit the bathroom or if they are spending a long time in a particular room, which may be unexpected.

This information can be used to open a dialogue around why they may not be sleeping well, why they might be visiting the bathroom frequently or around any other unexpected activity, and can make it easier to understand how their care can be improved.

To find out more about Just Checking and how it can help practitioners find the right questions to ask, please call 01564 785 100 or contact customer support online and we will get back to you shortly.

This website uses cookies to improve your experience while you navigate through the website. Out of these, the cookies that are categorized as necessary are stored on your browser as they are essential for the working of basic functionalities of the website. We also use third-party cookies that help us analyze and understand how you use this website. These cookies will be stored in your browser only with your consent. You also have the option to opt-out of these cookies. But opting out of some of these cookies may affect your browsing experience.
Necessary Always Enabled
Necessary cookies are absolutely essential for the website to function properly. This category only includes cookies that ensures basic functionalities and security features of the website. These cookies do not store any personal information.
Non-necessary
Any cookies that may not be particularly necessary for the website to function and is used specifically to collect user personal data via analytics, ads, other embedded contents are termed as non-necessary cookies. It is mandatory to procure user consent prior to running these cookies on your website.
SAVE & ACCEPT
Go to Top